What is a Forensic Document Examiner

A Forensic Document Examiner (FDE)  is someone who has received proper training and analyzes documentary evidence to determine origin or authenticity.   They are an essential part of the success of the forensic science community. Their main responsibility is examining written, typed, or printed documents using a scientific methodology and equipment.

Their essential responsibilities go beyond evaluating different documents. They prepare demonstrative exhibits, write expert reports, and state their opinions regarding the documents which are being analyzed. This means they testify in court proceedings if the case goes to trial.

A successful document examiner will work on the evidence following recognized standards and practices, being able to write and explain their findings to non-experts in a relatable, professional way.

The Difference Between Forensic Document Examiners and Graphologists

If you are looking to hire a forensic examiner, check their references, schedule a brief phone call, and explain what it is that you would like the examiner to do.  Private examiner’s do not charge for initial phone calls and will be able to explain how the Retainer Agreement works and any other charges that may be possible.  Typical engagements/retainers will require a certain amount to cover a set amount of time.  Anything over the initial retainer, may be charged at an hourly rate.  Some examiner will charge a flat fee.  Typical costs to hire an expert can range from $500 USD  to several thousand dollars depending on the complexity of the case.  It’s helpful to work with an attorney before hiring an expert to determine if the Expert can be beneficial to your case.

Where Can You Find a Forensic Document Examiner

Forensic document examiners can be found in local, state, and federal crime laboratories. Federal and State Laboratories offer training to select individuals in the analysis, comparison, and evaluation of questioned documents.

They can also be found in private practice assisting in civil cases.

Why and When You Need Forensic Document Examination?

Examinations conducted by document examiners are multi-faceted and cover many areas including: signatures, evidence of alterations, indented impressions, paper, printing processes, security and identity documents.  Most examinations are comparing a suspect (questioned) document to known standards for authentication. Original documents are preferred for the examiner to assess as much information as possible.  If an original is unavailable, a high quality copy may be used depending on the case.  An analysis, comparison and the evaluation of the characteristics observed by the examiner will be noted and significant findings will be produced in a report with demonstrative exhibits. Working in a non-destructive environment, examiners will protect the documents received ensuring the integrity of the items received.

Most forensic document examiners analyze handwritten evidence. Signatures are the most common form of evidence that needs to be analyzed. Specifically, the court usually questions the authorship and authenticity of a signature or written letter. Other handwritten evidence includes wills, contracts, and deeds.

Forensic document examiners also examine other vital documents, such as medical charts, to determine authorship of handwritten entries or dating questions concerning when an entry was produced. They also compare questioned handwriting to known suspect(s), on anonymous correspondence, timesheets, checks, and tax returns.

Forensic document examiners can also identify if any alterations and erasures were observed on the typewritten document.

Questioned and known documents received to the Laboratory are given a designation, numbered, and labeled before any analysis begins.  Once the documents have been properly labelled, an analysis begins by reviewing the entire document without equipment noting any limitations, observations, etc.  Once the initial analysis has been performed, the examiner will perform a more thorough review using equipment such as side lighting, transmitted light, and magnification to prepare a more detailed analysis. Pictures, observations, drawings, will be captured in detailed notes demonstrating what the examiner observed.  This is the first step in performing a document analysis.

Examining a suspect’s signature on a document is a frequent request received by a forensic document examiner. Deciding if the signature is genuine or not requires careful examination of several facets of the signature including line quality, speed, letter formations, height relationships, and size. Because signatures are the most common type of forgery, suspect signature cases appear in the authentication of sports memorabilia, contested wills and deeds, employment contracts, and checks.

Check The Authentication of Documentation

Conducting a comparison with handwriting or a security document is best compared to a relevant, contemporaneous, and comparable document.  Known standards should be verified before using them in a comparative examination. Document examiners performing comparisons against identify documents such as passports must rely on samples provided from the City, State, or Country of origin.  Most government laboratories have a Memorandum of Understanding (MOU) between countries to provide updated information regarding security features or changes.  Handwriting exemplars should also be verified by the agent or officer collecting the exemplars.  After the handwriting is collected, it should be labeled by the individual who collected the handwriting, with name, date, time and any other relevant information so these specimens can be used and introduced into a court of law, if needed.

Not only does a forensic document examiner analyze handwriting, but they also perform non-destructive testing on ink samples to determine if the same or different ink was used to prepare a document.

For example, an examiner may try to see if there were certain words added or changed in the said document after the document was written. They can also identify whether a fabric or film ribbon was used to prepare a typewritten document.

Another aspect of a forensic document examiner’s job includes the analysis of the paper used to write the document. A watermark in the paper may determine a date when the paper was manufactured and the company that produced it.

Forensic document examiners analyze the paper for indented writing. These are indentations that may not be visible to the eye but are transferred through the pressure of the writing instrument on sheets of paper underneath where the writing was performed. This type of evidence lends investigative assistance or helps determine the sequence of entries.

Chesapeake Energy Corporation was an oil and natural gas exploration and production company operating in Oklahoma City, Oklahoma. They relied heavily on third party vendors and contractors to perform services at oil and gas wells.  One vendor, Mr. Justin Foust, worked with Chesapeake Energy for almost nine years becoming familiar with payment procedures. Mr. Foust knew that invoices less than $5000 USD,  if submitted with an authorizing signature and unique identification number,  would be processed by the accounting department without further review.

Crux of the Case 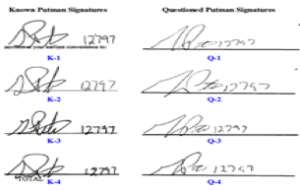 Some of the dissimilarities include:

Becoming a forensic document examiner requires the necessary training and skills to aid in court cases. To become an examiner, a bachelor’s degree is needed in forensic science or a program that is similar. This provides the individual with a background in forensics and the criminal justice system.

The training of the examiner covers all facets of documentary evidence, practical exercises, laboratory exercises, reading essential textbooks in the field, completing oral and written boards, and participating in moot court exercises. Training to become a forensic document examiner takes a minimum of two-years full time in an accredited laboratory.

Get my complete ebook!

Have you ever wondered what it’s like working at the FBI Laboratory? Examining forensic evidence in a high profile case? Testifying against a suspected murderer?

If yes, this ebook is for you! Sharing intimate knowledge, I’ll take you behind the scenes of 8 of my most thrilling, complex, and infamous cases.